The original, unbarrelled, version could be tasted at the Copenhagen Beer Festival as Ugly Duck/De Molen Eendens & Molens, but hasn’t been for sale elsewhere until now. It’s an 11% Imperial Stout brewed with a little licorice and some smoked malt. Read an excellent blog in Danish from the brewday at Rigeligt Smør.

It’s a thick, intense and sweet beer, a real “by the fireplace” sipper. The licorice is completely integrated in the beer, it really doesn’t feel like a beer with added licorice. The smoke is very light in the background, and I noted a leather-like overtone from the smoke. Back in May, when the beer was just a few months old, I felt that it had a really hoppy bite in the aftertaste. Now, you certainly feel the bitterness in the finish, but it’s not a dominant feature.

In my opinion, this is the perfect kind of imperial stout for barrel aging. Sweet, rich and thick and ready to pick up some added complexity from the oak and from the previous use of the barrel. My experience is that lighter, more aggressive stouts, perhaps with hops more dominating, are better in their fresh version and no barrel aging can really improve them. De Molen’s own Hel & Verdoemenis is an obvious inspiration for Nothing But Trouble, and the beer behind some of the best barrel aged imperial stouts I have ever had. 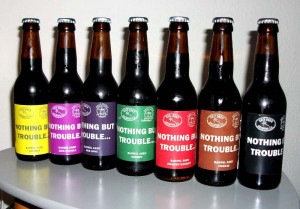 Nothing But Trouble generally works very well in the barrel aged versions. The six barrels in no particular order are Jack Daniels, Whisky, Smoked Whisky, Sherry, Red Wine and Cognac. They all appear nicely balanced, and if they have one thing in common, it is probably that the previous use of the barrel adds more to the beer than the oak itself. But with the hoppy finish, the tannins from the oak aren’t really needed for balance.

My favourite was the sherry, which has a complex dessert wine character, with raisins, sweet cherries and grapes on top of chocolate and licorice. It’s as if the fruity notes brings out a little extra chocolate in the beer, if that makes any sense.

Jack Daniels and (Bruichladdich with no sign of smoke) whisky barrels both add some oak to the flavour, especially Jack Daniels. There’s vanilla and coconut notes, everything that you would usually expect from the most classic bourbon barrel aged imperial stouts. The whisky barrel adds a little more notable alcohol, and some notes of dried fruit, and also brings out more licorice in the beer than the others.

In the red wine barrel, there is notes of red berries and a fruity touch. The barrel adds a little tannin in this one, giving it a little more bite on the tongue.

I’m not a fan of smoked whisky or peat smoked malt used in beer, but for those who do, I think this one (Bruichladdich Port Charlotte) works pretty well, with those iodine peat smoke notes lingering quite elegantly over the beer. The cognac was also a little disappointing, with hot alcohol quite prominent. I suppose that’s what cognac does, but it didn’t add anything extra to the beer in this case.