The chef at t’Hommelhof, Stefaan Coutteneye, has kept the same kitchen philosophy for 30 years now: Local ingredients, old traditions, and the use of beer in the kitchen. And finally, the world has caught up, and terroir and tradition are the hippest things in the restaurant world. For those who want to catch up, Stefaan has even written a book Cooking With Belgian Beers which came out last year.

But the night began at St. Bernard just outside of Watou. There we had a starter in the form of some Paté with St. Bernardus 12, and pork rillette. With the light St. Bernardus Extra 4, it worked perfectly. It’s a beer modelled after what the trappist monks brew for their own use, sometimes called an Enkel, to match the dubbel/tripel/quadrupel system.

The St. Bernard brewery is a mid-sized family brewery. It’s also one of the youngest of the Belgian Family Brewers. The brewery opened in 1946 with the purpose of brewing beer for the nearby Westvleteren Abbey. In 1992 the Westvleteren license ended, and after going through a little trouble and changing owners, the brewery continued brewing the same kind of beers under their own name, St. Bernardus.

The brewery is quickly expanding, with demand growing all over the world, though the Belgian market is still at least 50% of the sales. There are 13,000 annual visitors to the brewery, and after having expanded the brewery itself last year, they are now focused on improving the visitor experience, especially to make sure that the many visitors don’t get in the way of the brewery workers.

After a quick brewery tour, and pictures of the beautiful West Flemish sunset, we went to t’Hommelhof, for a quick two courses. First was a lovely fried seabass with cauliflower. Simple, and delicious. We had St. Bernardus Tripel, which in my opinion is one of the best in the world, and good tripel always works with fish. A ground rule of beer and food pairing. 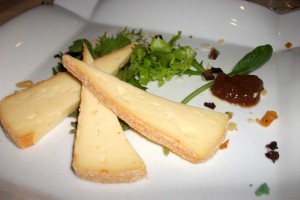 After the fish we had cheese, a northern French red rind cheese. Very fitting, since a well known red rind cheese like Port Salut was also developed by Trappist monks. It was a really flavourful cheese and called for a big beer. St. Bernardus 12, the top of the range was just perfect, with sweetness to balance the cheese, and alcohol and carbonation to clean up the mouth in between bites.

Stefaan was going to Denmark the next day, as part of the Belgian Beer Week in Denmark, arranged by the Belgian embassy. Perhaps I felt that we only got to experience the tip of the iceberg at t’Hommelhof, but that just means that I’ll be very happy to return some other time.