The brewery in Mechelen dates back to 1471 when nuns brewed beer, but it was taken over by a genever distilling family in 1872. The fifth generation owner of the brewery, Charles Leclef, bought back and renovated the buildings of the long gone Distillery de Molenberg in 2009 and has started whisky production.

The brewery seems to be a few step ahead of the pack through history. All the way back in 1962, the brewery gave up competing with the big international players in the pilsner and lager market, and concentrated on a small production of strong specialty beers, under the brand name Gouden Carolus.

The idea with the whisky production is to combine know-how. A first class Scottish pot still has been installed, but the difference is what goes into the still. Usually whisky malt is from a lower quality barley than beer malt. But the Het Anker whisky is made from a regular mash to a Gouden Carolus Tripel, without addition of hops, fermented at the brewery in Mechelen, and then brought to the distillery. 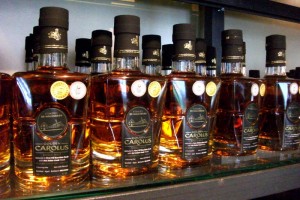 After careful distilling, the spirit is aged at least 3 years on oak. The first releases have been aged on used bourbon barrels like most whisky in the world, but in the last two years, they have had “Anker Casks”. Used red wine barrels have been cleaned down and prepared as new. The regular whisky from Stekerij de Molenberg is now finished for 6 months in these barrels, which adds colour and other flavours to the whisky. 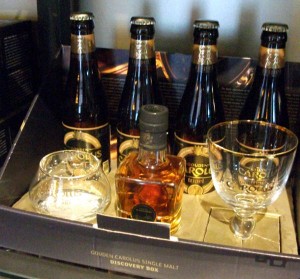 Of course I asked if there are any plans to aged Gouden Carolus beer on own used barrels, but that’s not in the plans so far. However, a whisky infused beer is on the way, and should be released quite soon.

I have to admit that I can’t tell the difference between good whisky and extraordinary whisky, but the two varieties we tasted (just bourbon barrel, and Anker Cask finish) were very tasty. They shared a fresh, young character, with fruit and citrus dominating and a little vanilla showing up in the aftertaste.