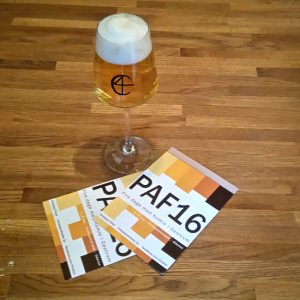 The beers will all be changed every morning and every evening at 6pm. The cask ales will be a little more stable, simply because Thornbridge Jaipur and the golden ales from Crouch Vale are ridiculously popular. In a seperate tent, put up to double capacity, the programme is also more stable, with seven taps being the same all weekend, and five more used for leftovers from the main bar.

Thursday afternoon, the highlight has to be Prairie Funky Gold Simcoe. The Funky Gold series is the one exception to the rules that sour IPA is a silly idea. I have actually only had the Amarillo and the Mosaic versions, but I loved them! Beerbliotek Citra Motueka session IPA is also worth a look. Just 3.5% ABV.

For Thursday evening, Mikkeller SpontanDryhop isn’t so much a sour IPA as a dry hopped geuze. You have probably never had anything like it, and I recommend to give it a try. It’s quite tasty. Omnipollo Magic #8 is a pale ale with maple candied almonds. I don’t know what to think about that, but I want to try it, even if I’m definitely not Denmark’s biggest Omnipollo fan. 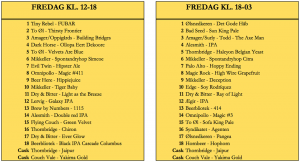 Friday afternoon, it could be a good idea to begin with Brew By Numbers 11/15, a 3.8% session IPA with Amarillo and Mosaic hops. I don’t recall having that combo before, but it’s the hippest hop in the world, combined with my personal favourite. And Amager/Oppigårds Building Bridges IPA is a masterpiece. Daerk Horse Ollopa Eert Dekoorc has the strangest name of the weekend, and is supposed to be an old school IPA single hopped with Apollo.

Friday evening, I’ll look forward to Ølsnedkeren Det Gode Håb. It’s actually a lager, visiting the pale ale festival, but it’s supposed to be hoppy and bitter like an IPA. Dry and Bitter Ray of Light is a lovely IPA filled with juicy, tropical hops. Enjoy it while the sun is still up! Same goes for Bad Seed Sun King, a 5% wheat pale ale with lots of juicy hops. Thornbridge Halcyon is a good IPA, if a little sweet and malty. It’ll be interesting to try it with Belgian yeast. 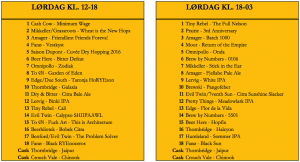 Saturday afternoon could begin with Amager Friendliest Friends Forever, a nice little 4.5% session IPA brewed for Mikkeller & Friends’ two year anniversary. Saison Dupont Cuvee Dry Hopping is always worth a taste. If it’s really vintage 2016, it’s even close to a world premiere. It’s on Untappd, but neither on Ratebeer, nor on the Dupont website yet.

For Saturday evening, Evil Twin/7venth Sun Citra Sunshine Slacker is a citra hopped session IPA, and sounds delicious. Fanø Black Sun is a black IPA made with Belgian yeast, which sounds a little interesting. To finish the tasting, how about Brew By Numbers 55/01, a 9.2% double IPA with a bunch of fruity hops. 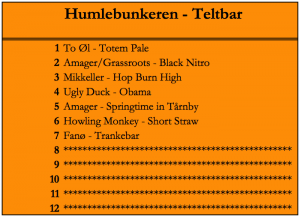 In the tent bar, Humlebunkeren, tap one will be gluten free all weekend, with To Øl Totem Pale Ale. The new releases Amager Springtime in Tårnby and Ugly Duck Obama will be featured here, along with the local Howling Monkey Short Straw, a brand new IPA that I tasted yesterday and which is a delicious bitter IPA with lots of citrus notes. One of the highlights of the weekend could easily be Amager Black Nitro, a black IPA that finds the perfect balance between a shitload of hops and a little touch of dark malts. To me, it’s the best of its kind.