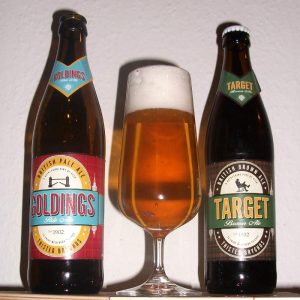 Last year they started an Anglo-American range with three American styles that I reviewed in Danish back then. This year they have presented three English styles. Here is a review of two of them, a pale ale hopped with Goldings and a brown ale hopped with Target. The third beer is Pilgrim, an oatmeal stout hopped with , no wait, with First Gold hops.

I love the label design. Very retro, very stylish. After being disappointed with the American beers, that is probably the main reason why I bought these two. They are for sale in supermarkets everywhere, and are quite cheap. 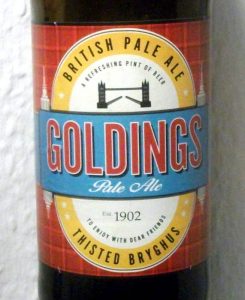 Thisted Bryghus Goldings pours a clear golden with a decent sized white head that quickly disappears. The aroma is dominated by malt. A malt character that I have come to expect from bottled, pasteurized English Pale Ales. Some grain and some oatmeal porridge, with notes of caramel, not too inviting.

The flavour is clean and well balanced, with sweet malts, along with grassy hops. The Goldings are there, but my impression is that they are much better presented in cask ales. Back when the beer revolution began in Denmark, some of the first beers we had access to were bottled English classics like Old Speckled Hen, Hopgoblin and Bishop’s Finger. This is exactly that kind of beer, for better or worse. 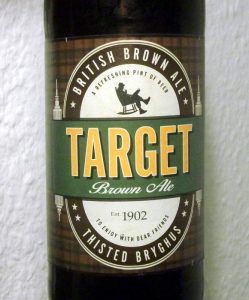 Thisted Bryghus Target is a lovely clear chestnut colour with a small off-white head. The malty aroma has caramel, toffee and roasted nuts. The flavour is sweet and malty, with caramel, fresh baked bread and a touch of liquorice. There are herbal hops, and also a nice bitterness in the finish.

There is a slight metallic impression of “industrial beer”, often seen, in my opinion, in top fermented beers from breweries that normally specialize in bottom fermented beer. Despite that, it’s clearly a better beer than Newcastle Brown Ale, with more going on.

I’m not in the target audience for this range of beers, but I think they are a little un-ambitious. They’ll probably sell to people who trust Thisted Bryghus and don’t feel the need to get to know a bunch of foreign breweries. But in many cases, you can probably get the original beer at a better price, and you’ll drink something that at least has a history. But the labels are nice.