Hops can be grown in a broad belt spanning between latitudes 35 and 55 degrees, north or south of the equator, though in Europe, it’s limited to a few small areas. In Belgium, hop growing has diminished to almost nothing compared to a hundred years ago. In 1900, 2200 ha. was used for hops, with more half of it being in the Aalst area,  and most of the rest in Poperinge. In 1980 there were still 800 ha., but today, the figure is just 160 ha. and 98% of it is in Poperinge.

It’s only very fitting that the museum focuses on historical hop growing. There are some exhibitions about hops in general, but much of it is artifacts, pictures and stories about hop growing in the old days. The hop harvest was a huge and important event up until a mechanized hop harvester was invented. The tall hop bines are cut down, and then the hop cones have to be seperated from the rest.

In the 1950s, 10.000 working class and unemployed people from around Belgium would flock to Poperinge to earn a good part of their annual income in the hop season. One of the gems of the museum is an old film of people picking hops, with several fun little episodes. 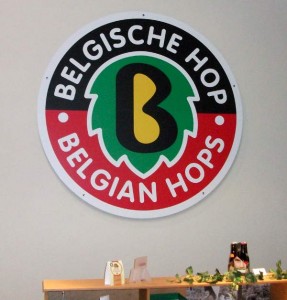 Today, the big hop harvest is merely a memory and history, but hops are still celebrated in Poperinge in a Beer and Hop Festival taking place every three years. The next one will probably be in September 2017, and it sounds like a fun excuse to visit Belgium.

The museum has a nice balance between interesting exhibitions and solid information. I think it could be worth a visit for a family holiday with children that are not too young. For the beer geek on an excursion to Western Belgium, it’s definitely worth a visit, as something to tick off on your beer life bucket list, and to learn a lot about the ingredient that some of us call the most important in beer.

One Reply to “Poperinge Hop Museum”