Friday around noon, a bus full of very excited beer writers arrive at the Lindemans family brewery. It’s the first stop of our epic tour of Belgium, and we’re here to taste some very exclusive spontaneous fermented beer. Not the sweet, pasteurized fruit lambic that makes up most of the brewery’s business, but the real thing, the real lambic beers. And as we’ll find out, we’re also here to experience a bit of magic from the brewery kitchen. 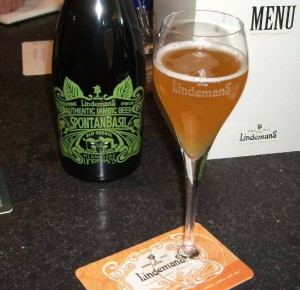 Our aperitif was Lindemans/Mikkeller SpontanBasil. An uncompromising collaboration beer mixing good Belgian lambic beer with crazy Danish ideas. The finished beer has further matured with huge amounts of fresh basil, the way you would usually add cherries to make a kriek, or raspberries to make a framboise. The aroma of fresh basil is definitely there, but the jury is still out on whether it’s “very interesting” or “too interesting”.

We weren’t served specific beer pairings here, but the Basil worked very well with the appetizer: Beautiful salmon, marinated in geuze with a little onion confit. In the big book of beer pairings, delicate fish and lambic in on page one. No need to think twice. Next up was a simple chicken soup, liquid umami with pepper and light lambic notes, pairing well with the complex, tart beer.

As I write my way through our seven servings, it’s worth noting that they were all just little snacks, and made up a good, satisfying lunch. We still had SpontanBasil in our glasses for the seafood. First, a plaice fillet, with a really amazing butter and geuze sauce – probably the highlight of the lunch. Then a prawn skewer with a Lindemans Apple and curry cream. Delicious, and obvious pairings for any lambic beer.

The brewery presentation also came as an integral part of our lunch. Now, we had a technical tasting: Two glasses of pure, unblended lambic. One came from oak vats, the traditional way of brewing lambic. The other came from steel tanks where it had matured with oak chips, a technique well known in the wine world. They were extremely similar. I thought I tasted a little more complexity (from maturing in a breathing, natural material) in one, and a little more pure oak (from oak chips) in the other. I guessed wrong. 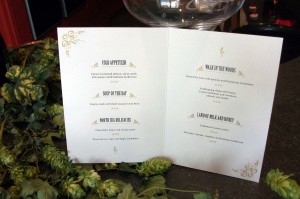 For the two meat courses, we had Lindemans Cuvée René Special Blend Oude Gueuze, a 15,000 bottle limited release, blended with extra old lambic. A fabulous, greasy foie gras with apricots turned out to be a great match. The fruity pork chop serving with taboulé, raisins, honey, rosemary and Lindemans Cassis was a little confused and didn’t make the same kind of undeniably brilliant match with the geuze.

For the dessert – a little chocolate cupcake with raspberry – we had two different beers. The Cuvée René Oude Kriek, a real, and sour cherry lambic, and the regular Lindemans Kriek, a pasteurized, sweet cherry lambic. As could be expected, the sweet version matched the dessert much better. Real kriek is great, but for different purposes.

After lunch, we had a quick tour around the brewery. It’s big. The 220 HL mash tun is not what I’m used to in the small upcoming Danish craft breweries. This is of course something different. The cousins Dirk and Geert Lindemans who run the brewery are sixth generation of the family. It hasn’t always been easy. Through the 20th century, lambic beers weren’t really popular. Sweet pasteurized fruit lambics were developed for the brewery to survive, and have proved very popular. Over half of the production is now exported, and to more than 40 countries.

As even the sweet fruit beers are at least one year old lambic, there is a lot of beer maturing here. Up to 70,000 HL waiting to develop the right flavours. Most of it is in steel tanks, but there are also oak vats. All the Cuvée René beers are made purely from lambic matured in oak vats, as that’s part of the rules for calling it “Oude Geuze” or “Oude Lambik”. The vats are 10 years old, made in the cognac region where they have a certain expertice in cooperage. The vats hold 100 HL each and cost 20,000 Euro. It’s quite an investment in doing the right thing. 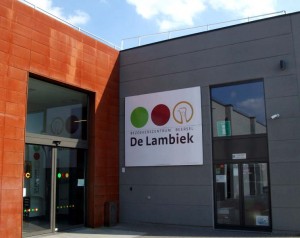 After Lindemans, we went a short trip to De Lambiek Visitor Center in the small village of Alsemberg, to finish our little trip into spontaneous fermentation. We watched a nice little film about lambic brewing, which was in English. Most of the little exhibitions were only texted in Flemish, but the shop and tasting room was definitely worth a visit.

The shop had oude geuze and oude kriek from the 11 members of the lambic association HORAL. You’ll notice that Cantillon is missing from this association – they do what they have always done, and don’t feel the need to use the legalla protected term oude geuze, since the Cantillon Gueuze is the same age it has always been.

We tasted a two year old unblended lambic from the Beersel brewery, and I bought a couple of bottles of the HORAL Mega Blend Oude Geuze, which was very reasonable priced, compared to dedicated beer shops elsewhere in Belgium. We drove back to Brussels, happy and exhausted after a good first brewery visit.