Here in Odense we have the annual H.C. Andersen Festivals, a week with 500 cultural events happening in Odense. Carlsberg is a sponsor of this, and therefore the festival asked them if the could brew a special historical beer. The first step to make this happen would be to find a tie between Hans Christian Andersen and Carlsberg.

Carlsberg’s beer historian (among other jobs) Bjarke Bundgaard talked about the work to find the tie. In a much quoted letter from July 1874, Andersen has good things to say about Albani, but there weren’t any ready quotes about Carlsberg. He lived most of his life in Copenhagen where Carlsberg was growing into the biggest brewery in Denmark. The Jacobsen family which founded Carlsberg were generous people who loved the arts, and it’s very likely that they knew Andersen.

1874 must be a special year for Andersen and beer, because they found out that in October, Andersen wrote in his diary: “Received a letter from Brewer Jacobsen that he had sent me 12 half-bottles of Export, and that he would keep me stocked through the winter until this beer is in the market again”. Carlsberg brewed two beers at that time. The regular lager, which is Denmark’s original bottom fermented beer, and an export version, which was mostly for export. A half-bottle was about 3/8 of a liter, more or less a Danish standard bottle of today.

Next step was to reconstruct the beer. With the help of Carlsberg’s brilliant archivist Ulla Nymand, they found a brewing journal from January 1874. This could be the exact beer Andersen received, as beer was matured in the brewery cellars for a considerable time, and they only brewed in the winter months. The Export lager brewed on January 10 was marked “very good” in the journal, so this became the starting point. 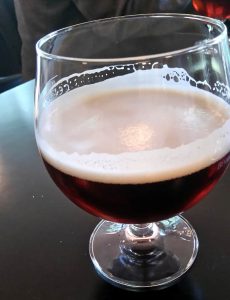 While the regular lager was brewed with 18 bushels of malt, it took 22 bushels to brew a batch of Export. In the modern version, this has resulted in a beer at 6.2% ABV. It was brewed from the semi-dark Munich malt. Brewmaster Morten Ibsen is guessing that the Munich malt in 1874 was probably a little more caramelized than today, and consequently a little caramel malt is also added.

The Export lager was brewed using twice as much hops as the regular lager. Nothing wild and crazy, but enough Hersbrücker hops was used to bring the bitterness of the reconstruction to 30 IBU. While the Jacobsen brewery is in the same location as the original Carlsberg brewery, the same water source isn’t used anymore. Instead they have adjusted the water to match the original brewing liquid.

After Morten Ibsen and Bjarke Bundgaard had introduced the beer, it was time for the inevitable. Tasting the beer. It’s a beautiful beer, deep amber in colour and with a firm and lasting off-white head. The aroma is a nose-full of delicious malt. Bread crust, fresh malt, crackers and a touch of caramel.

The flavour is dominated by malt, but without the sweetness that you might expect. It’s a very clean and dry flavour, with a quite hoppy finish. It has the strength and the colour to be considered a bock, but not the sweetness. In fact, this is just the kind of malty beer that I like. 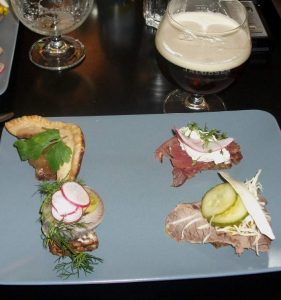 We had a plate of classic Danish “smørrebrød“, which never fails to match a flavourful lager. The malt character plays perfectly to the dark Danish rye bread, the body of the beer stands up to all the spicy, sweet and sour sides, and the hops cleanse the palate and leaves your tastebuds ready for more.

This beer tells a fantastic story, but it’s also a very good beer. It will be served on tap all over Odense when the H.C. Andersen Festivals begin. At official festival places, and (mostly) at places that usually carry Carlsberg or Tuborg. It will also be in major Carlsberg/Jacobsen places in other Danish cities. If you get the chance, try it. Even if you mistakenly think that “good beer” can’t be Carlsberg, and can’t be lager.