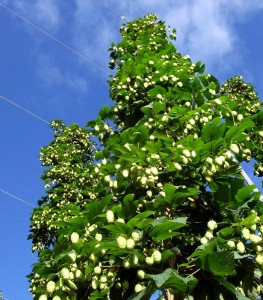 The press tour was carefully planned to coincide with the time of the hop harvest, and it was a great bonus to combine a beer trip to one of the world’s classic beer countries with a visit to the hop fields. The place we visited was the hop farm t’Hoppecruyt, which is open to visitors in smaller or larger groups. Benedikte Desmyter, fourth generation owner, gave us an excellent tour of the place. 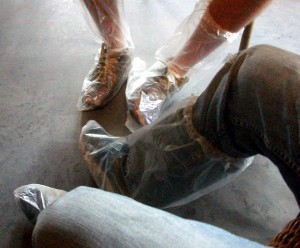 It had been a wet, rainy night, and before going out in the fields, we were all given a pair of plastic bags as makeshift rubber boots. Then we drove by tractor out in the field, to where they were currently harvesting, to watch the fascinating sight of hops being cut down.

The hop plant is very tall, and in the growth season it will grow up to half a meter a day. When the growth season begins in early spring, hop shoots are harvested as a delicacy not unlike asparagus, and five shoots from each plant is allowed to grow. A tall system of very thin steel wires is raised for the hops to grow on, and this wiring is simply cut down with the plants at harvest time. Half a meter of the plant remains on the field, to finish the growth cycle and prepare for the winter.

The whole hop plant is brought back to the farm, and a very intricate machine will seperate the hop cones from the bines and the leaves. These are then cut into pieces, and left to compost, while the hop cones are transferred to the drying rooms. The steel wires are non-galvanized and are broken down in the compost in a matter of days. To avoid diseases, the compost is never used on the hop fields, instead there is cattle on the farm to provide natural fertilizer.

The hops looked beautiful, and Benedikte told us that the harvest in Belgium has been pretty good in 2015. Sales are also good, and all the hops that they can grow are sold long before harvest time. Some Belgian brewers make it a point to use local hops, as terroir and local ingredients matter more than ever. One of the more famous examples is Van Eecke’s Hommelbier Fresh Harvest, which also includes green hops from t’Hoppecruyt.

Another recent trend is that they are growing more different varieties than before, also experimenting with newer varieties. But the hops we saw harvested were a classic British Goldings variety called Mathon. They were to be used in Kasteelbier from Brouwerij Van Honsebrouck.

And that’s where our tour quite appropriately ended, with a tasting of several Kasteelbier, using hops from t’Hoppecruyt. Van Honsebrouck is an old family brewery, currently run by the 7th generation of owners. They are best known for their really strong ales, and that’s where we began.

Kasteel Donker is a dark, sweet 11% beer, where the hops hardly play any role. Goldings were used for bittering in this one. Kasteel Tripel is golden, and also 11%, and uses Goldings for bittering, and the newer German variety Saphir for aroma. For a beer 2 or 3% stronger than most tripels, it didn’t have much more to offer in complexity or intensity, just more alcohol.

Finally we had the rather new Kasteel Hoppy, which is a nice golden 6.5 beer, with a nice hoppy aroma on top of the classic Belgian yeast profile. It uses Goldings for bittering hops and Saphir for aroma hops and dry-hopping. The hops adds a spicy and herbal touch, but it’s by no means the hoppiest Belgian blonde.

After the beer tasting – which included a song from Benedikte too – we visited the drying rooms where the fresh, green hops are dried as quickly as it’s possible. Warm, dry air is blown through the hops to ensure that they don’t lose any aroma in a lengthy drying process. t’Hoppecruyt doesn’t have a pellet-making machine (yet), so it’s then transported to another farm and turned into hop pellets, ready to be used in good beer.