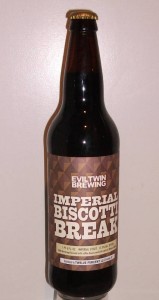 The original Biscotti Break was a 7.5% porter brewed in 2011 for the Rome-Barcelona beer cruise. A porter with Italian inspiration, brewed with espresso, vanilla and almonds, hence the name. It was good, but not leaving a lasting impression on me. In the 11.5% imperial version, it’s my impression that there’s less coffee, vanilla and almonds, to let the beer shine on its own.

The initial impression in the nose is friendly and inviting roasted malts. Dark chocolate dominates, with light roasted coffee beans and a burned touch of hard roasted barley. Then comes a second wave of complexity, adding vineous notes of sweet dessert wines and brandy, sweet cherries and vanilla.

On the tongue, the beer also offers lots of chocolate, some coffee and the same range of complexity as the nose, before a more bitter finish made up of coffee and roasted malts. It’s a full bodied beer that feels silky in the mouth. 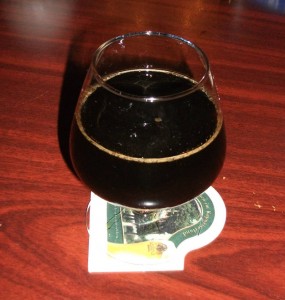 There are generally two kinds of imperial stouts that I really like. One is the dry and very hoppy imperial stout favoured by many Scandinavian brewers. Beers like Amager Imperial Stout, Mikkeller Beer Geek Breakfast, Nøgne Ø Imperial Stout and To Øl Black Ball are generally easy to drink, and very pleasurable. Among the sweeter imperial stouts it’s harder to make me happy. They have to be malt sweet, not sugar sweet. Not cloying, and not with too much hard roasted character, that may appear like ash, cold coffee, soy sauce or even ball pen ink…

The really good sweet imperial stouts appear like dessert wines or barley wines, except with a darker character of chocolate, liquorice or coffee beans. They are beers like Närke Stormaktsporter, Brooklyn Black Chocolate Stout, Goose Island Bourbon County Stout and now… Evil Twin Imperial Biscotti Break, one of the very best beers I have ever had.