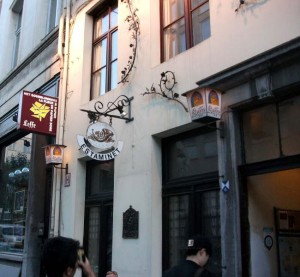 Het Goudblommeke in Papier is a classic café in the heart of Brussels, a favourite watering hole of the surrealist movement in the 1920s. The name (La Fleur en Papier Doré in French) means The Golden Paper Flower, a poetic and very fitting name. The little café with it’s kitch/bric-a-brac interior is still a meeting place for artists and writers.

The founder of the café was Geert van Bruaene, who was also a poet and art dealer, so it was only natural that artists like René Magritte (Artsy gallery), Louis Scutenaire and Marcel Mariën would come here – do look up their art, although you probably shouldn’t google Marcel Mariën’s photography art while at work. We came here for a beer dinner, though, with family brewers Brasserie Dubuisson and Brasserie Lefebvre delivering the beer.

First we had Cuvée des Trolls, a 7% golden ale from Dubuisson. A nice aperitif, with two small snacks. Brussel bloempanch, a blood sausage, and kip kap, a soft meat sausage, much like brawn (“sylte” for my Danish readers). When all had arrived and sat down, it was time for the actual starter. We had smoked salmon with a Hopus beer vinaigrette, of course served with Hopus, an 8.3% strong, hoppy blonde from Lefebvre. As a hophead used to American and Scandinavian IPAs, it doesn’t do much for me though, and I think it’s rather yeasty.

Next, we had a classic Belgian beef stew, Stoofvlees in Flemish. It was made – and served with Barbar, an 8% blonde beer brewed with 2% fair trade honey from Guatemala. It was an amazing stew, full of flavour with a really rich sauce, and though I’m not a big fan of honey beers, this stew would make any beer in the world look good.

For dessert we had a little chocolate mousse, and it was served with the exclusive Bush de Nuits, a dark strong ale from Dubuisson, aged for half a year on red wine casks from Nuits-St-Georges in Burgundy. It’s an exciting and complex beer with lots of wine and oak character, and a nice tartness in the finish. In America you’ll find it as Scaldis Prestige de Nuits, as Anheuser Busch doesn’t like the Bush name.

There are some great beer restaurants in Brussels, but Het Goudblommeke in Papier is definitely worth a visit whether you’re a beer tourist or a “regular” tourist.