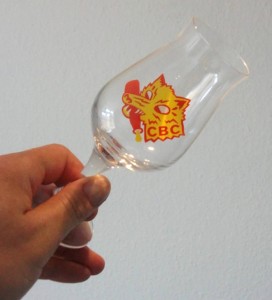 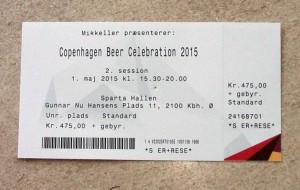 Before the festival we would have preferred one Friday ticket and one Saturday ticket, but one session turned out being just right. And it would have been impossible anyway. Very few single session tickets were sold this year, and we didn’t want four sessions under any circumstances. But we did manage to buy the perfect tickets, from a friend who was unable to attend.

I can understand why Americans wouldn’t want to come to Copenhagen for just one session, but I honestly think it would be worth it selling most of the tickets in pairs, either the two early sessions or the two late sessions. More people would get a chance to attend, and fewer people would stumble around too drunk to enjoy their time. I know I get drunk enough from just one session.

Things were very much the same as usual, this year. Everything worked perfectly, like it has since year two, when the first year’s small issues were solved. And beer-wise we saw the same mix of (barrel aged) imperial stouts and sour/funky saisons. Two small corners of the beer world, but clearly what the beer hipsters want these days. Hooray for the breweries that brought dry, regular strength IPAs and the likes.

The good news is that there were some good black monsters and brewers are clearly getting better and better at making sour beer. My top black beer was Cycle Brewing Rye DOS, the classic sweet, sticky and boozy bourbon/whiskey barrel aged stout that struck a pretty nice balance to make an immediately impressive dessert beer sipper. Jackie O’s Bourbon Barrel Aged Dark Apparition was in the same genre, with a little more licorice and hard roasted character, but still with a pretty decent balance. 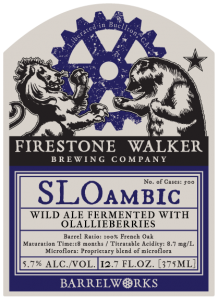 My top beer at the festival was Firestone Walker’s SLOambic, one of the most lambik-like American sours I have ever tasted. Although Firestone Walker usually deal in English-inspired beer, they’re masters of barrel aging, so perhaps it isn’t a surprise. The beer is a blend of beers, with a blend of wild yeast and bacteria, and the addition of the blackberry-like ollalieberries. A very tasty beer, and just what I needed after so many sweet beers.

Surly Pentagram was another impressive beer, a much more classic American Sour, bursting with oak character, along with cherry notes, caramel and molasses. I also had it at CBC 2014, but it was worth the revisit. Final shoutout goes to Amager Wait Until Spring, Bandini, a single hop saison with Mosaic hops. Dry and refreshing, with great hop character, it’s an excellent beer in what I would call the “modern saison” style. 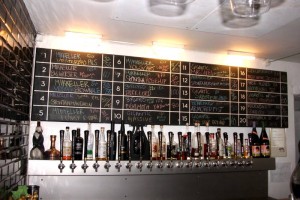 Outside of the festival we spent time visiting old friends like Kihoskh, Fermentoren, Mikkeller Bar and Mikkeller and Friends, and had some great beers along the way. Coming to Mikkeller Bar on Friday when opening was especially nice, since it’s rare that there is time to sit in the bar and chat with the bartender while working our way through the beer list. But the real highlight was spending Saturday afternoon at Taphouse. 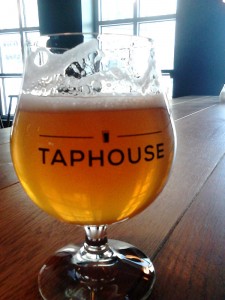 Mads and I are both fans of classic Franconian lagers, and the Gänstaller Kellerbier and Munkebo Hel were just wonderful (though the former was showing signs of age). On top of that there were a bunch of fine beers from Ølsnedkeren left from their tap takeover, and Taphouse had just right balance of not being crowded and not being dead either. After there we went to Warpigs for dinner, but that’s another story for another blog entry.

See you next year for Copenhagen Beer Celebration 2016. I will definitely be back, if I can get a ticket.

One Reply to “Copenhagen Beer Celebration 2015”