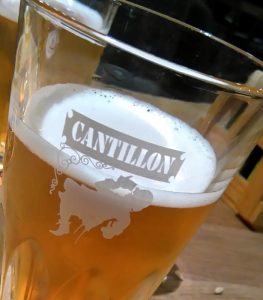 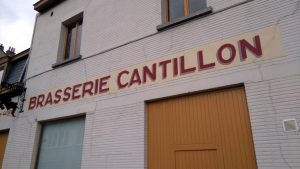 Cantillon are really traditionalists, and they have decided to stand outside the lambic organisation HORAL, which has a lot of members who make a living on “fake” sweetened lambic, with just a little side production of the real thing. I assume that Cantillon have been able to survive in the dark times of lambic being in crisis, largely thanks to the museum and tourists.

And since lambic has really taken off with interest from America, some Cantillon beers that used to be regular production, have become some of the most sought after beers in the world. Tired of seeing these beers being regularly sold for insane amounts on the internet, Cantillon have moved to serve more and more beers exclusively at the brewery. 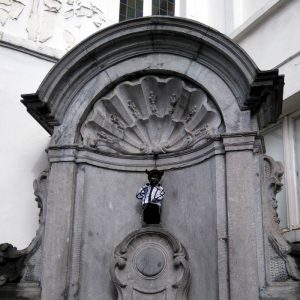 When I first visited in 2009, the museum tour of the brewery ended with a kriek, a geuze and one special beer being served from bottle. Today the Cantillon tap room has several beers to choose from, ranging from kriek and geuze, to really unique rarities.

We went twice, just for the experience. We had various good beers, but the absolute top beer was Cantillon Lambic d’Aunis. It’s a fruit lambic brewed with Pinot d’Aunis grapes, released in January 2016, and only for drink in at the Cantillon brewery. It’s a hazy, pale red beer. The nose isn’t dominated by grapes, but apart from the usual funky aroma of Cantillon, there’s a lot of wood. I found some rather spicy wooden notes, like juniper or cedar woods. 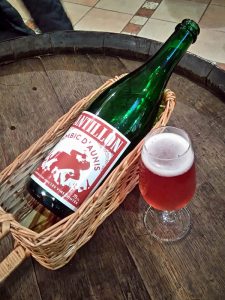 The flavour is quite sweet and mild for a Cantillon. There’s fruit and berries, along with wood, and plenty of Cantillon character. The finish is tart and has a drying tannic wood, but it remains quite mild and mellow compared to other Cantillons. Personally, I usully prefer geuze from 3 Fonteinen, Tilquin or Girardin, because I don’t care for the aggressive acidity, but this is an absolute favourite of mine. A fabulous beer that you can pretty much only have if you go to Brussels.