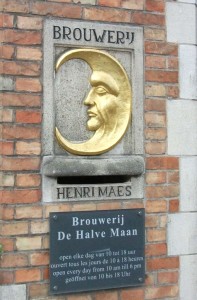 The brewery was operating at a minimum just ten years ago, but they’re rapidly growing. Their famous range of abbey style beers, Straffe Hendrik was introduced in the 1980s, but for a long time brewed elsewhere. Now it’s brewed on the site, along with the rising star Brugse Zot, which was launched when sixth generation owner Xavier Vanneste took over the brewery in 2005.

We actually began the brewery tour well outside of Bruges. In the industrial area outside the historical city center, De Halve Maan has built a brand new bottling plant, because it’s impossible to grow inside the UNESCO World Heritage listed city. Xavier met us there, and explained how a pipeline from the brewery to the bottling plant is in the works.

At the moment, four or five trucks a day bring beer from the brewery to the bottling plant, and that will be avoided when the 2 miles long pipeline is ready to transport the beer underground. The beer will be pushed using CO2, to keep it all clean and avoid wasting beer. 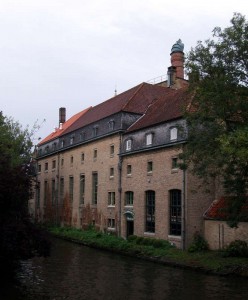 We drove to the tourist parking place, and walked the short trip from there to the beautiful old streets and the brewery. The building is old, but the inside is new and modern. A new stainless steel brewery was installed last year, with four 50HL brew kettles. Moving the beer from one kettle to the next during the brewing process enables De Halve Maan to start a new brew every four hours, theoretically allowing 12 5000 liter brews per day.

They don’t brew that much though, and another important part of the business is tourists: No less than 100,000 visitors per year, visiting De Halve Maan for a brewery tour, the historical exhibition and a beer or two in the bar.

We had the super quick tour, and then went to the restaurant for a quick lunch and some beer tasting. We had classic Belgian prawn croquettes, or garnaalkroketje, with a green salad and some excellent fries. The fat and quite mushy meal was perfectly suited to a light, refreshing and well carbonated beer, but we tasted a little bit of everything.

Brugse Zot, which means the Fool From Bruges, is a 6% classic Belgian blonde, a beer that works well with a lunch like this. The Straffe Hendrik Tripel was also an obvious choice. Straffe Hendrik means Strong Henry, and Hendrik was traditional name for sons in the family. It’s a good, fruity tripel with a bit of alcohol and hops in the finish.

An exciting new beer was the Straffe Hendrik Wild which is the Tripel which has been bottled with brettanomyces. Unfortunately it was a very batch and the brett hadn’t had time to develop, but it’s a promising beer. For dessert we had the heavy, and quite sweet Straffe Hendrik Quadrupel.

After lunch we had time for a trip around Bruges. I’m sure that the canal trip can be absolutely perfect, but on a rainy day in September it wasn’t. We had heavy rain, and a boat full of umbrellas made it a little difficult to enjoy the view. But I’m definitely coming back on a more sunny day, with better time to really see the city, and I’ll be looking forward to having my lunch at De Halve Maan again when that happens.