Borefts Beer Festival has evolved over the years and there have been changes every year. The past few years, the geographical lay-out of the festival has had to change every year, to accomodate more and more guests. This year it was all in one place, in and around the new brewing facilities. Much better than having the festival split up in two locations across the road, but also pretty crowded at times.

The breweries coming to Borefts have also changed from year to year, and the best news this year was that the two lambik houses Cantillon and Tilquin were there. There have been sour beers of various kinds from almost all brewers and every year, but with very few exceptions, there is just nothing that comes even close to the real thing, and I had a lot of wonderful beer from both brewers over the weekend.

At the other end of the quality spectrum, two brand new and unproven breweries had some of the worst beer I have had at Borefts at all. Every brewery has served some less fortunate or even undrinkable experimental beers over the years, from brewers who mistake malt vinegar for sour beers, or brewers who mistakenly believe peat smoked malt and Laphroig barrels have a place in the beer world, to brewers under the strange illusion that spice in beer is good and more spice is better. But this year we had some truly badly brewed beers. Maybe it isn’t fair to place these new brewers next to the cream of world class brewing.

Every year has had a challenge for the brewers. This year the challenge was to brew a version of that evil phenomenon called the Radler, that takes up valuable space on beer shelves across Holland, through Germany to Slovakia, even making occassional visits here in Denmark. It causes every proud, Reinheitsgebot-loving German brewer to pour cheap soda-pop in his beer, and it causes teenagers to believe that beer can taste like sugar-water.

Luckily the brewers at Borefts had met the challenge by taking a non-radler and call it their radler. There were a few interesting and tasty fruit beers among them, but they had very little in common. I really hope that the challenge next year is something that challenges the brewers on their brewing skills and not their imagination. Like a single hop pale ale, a crisp, clean pilsner, or a 5% porter. That would be much more interesting. 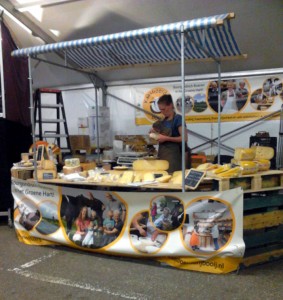 The food served at the Borefts Beer Festival has definitely also evolved, from a choice of two different sandwiches (if memory serves me right), to several food stalls with burgers, fries and stew, and local delicacies like good Dutch cheese. 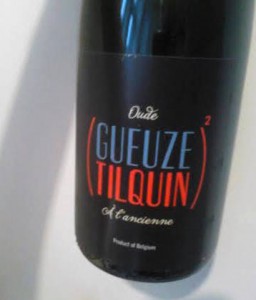 And finally: My favourite beers at Borefts 2014. Tilquin had a few new beers for me, and the best beer I had was Tilquin (Gueuze)²/Gueuze Squared. Not particularly sour, but very dry and very complex. I had it several times, and also brought home a couple of bottles from De Molen Beer Shop. And I finally got to taste Cantillon jonge lambik (young lambik), which was a missing piece in my beer world. Jonge lambik is by definition a work in progress, but this was more tasty than others I’ve had, tasting more finished. The other Cantillon beers – all served from tap – were beautiful as always.

There are always too few really good hoppy beers at Borefts, but two great breweries really know how to do that thing. Toccalmatto had a “Rye India Brown Ale”, which was a dark amber Imperial IPA with rye malt. Great balance of malt flavour and citrus hops, and full body, and bitterness to match. They also brought an absolutely fantastic imperial stout aged on Sagratino di Monefalco wine barrels with brettanomyces. The Kernel had a Simcoe/Chinook/Amarillo IPA, following their usual recipe as a pale golden, clean and fresh hoppy ~5% beer, one of those hoppy beers that you can just keep on drinking forever. And finally Buning Sky Plateau, a fruity 3.5% golden ale of the kind that is slightly more healthy to keep on drinking forever. 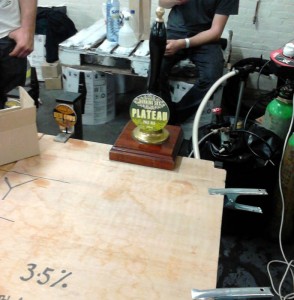 But as usual, the stars of the festival are by and large the strong black beers, which makes a lot of sense, since it’s De Molen’s own area of strength. The aforementioned Toccalmatto stout was up there. And Närke had brought two new versions of the legendary Stormaktsporter Kaggen, which s simply the best balanced strong black beer in the world. One was the “usual” bourbon barrel aged with added raspberry. It was amazing, though the raspberry didn’t do much of a difference, only adding a little fruity tartness to the finish. The other was aged on Laphroig casks and with added blackcurrant. It should be illegal to ruin such a fine beer with Laphroig casks.