Second blog post and I’m already turning to English. Since Borefts Beer Festival is an international European event, I would like my foreign friends to be able to read along. The festival took place at Brouwerij De Molen on September 27-28. We’re a group of three from Odense who were there for the fourth time, and this year we were 8 people going. The festival has grown and developed since 2010, but the center of attention is still great beer from some of Europe’s most innovative brewers. Although some beers ran out on Saturday evening it’s a festival with exceptional good logistics. Keep it simple, and things work. You buy a glass and some tokens, and then you walk around, tasting beers. This year it was even very easy to find a table, which is a bit of an improvement. And what did I enjoy drinking? 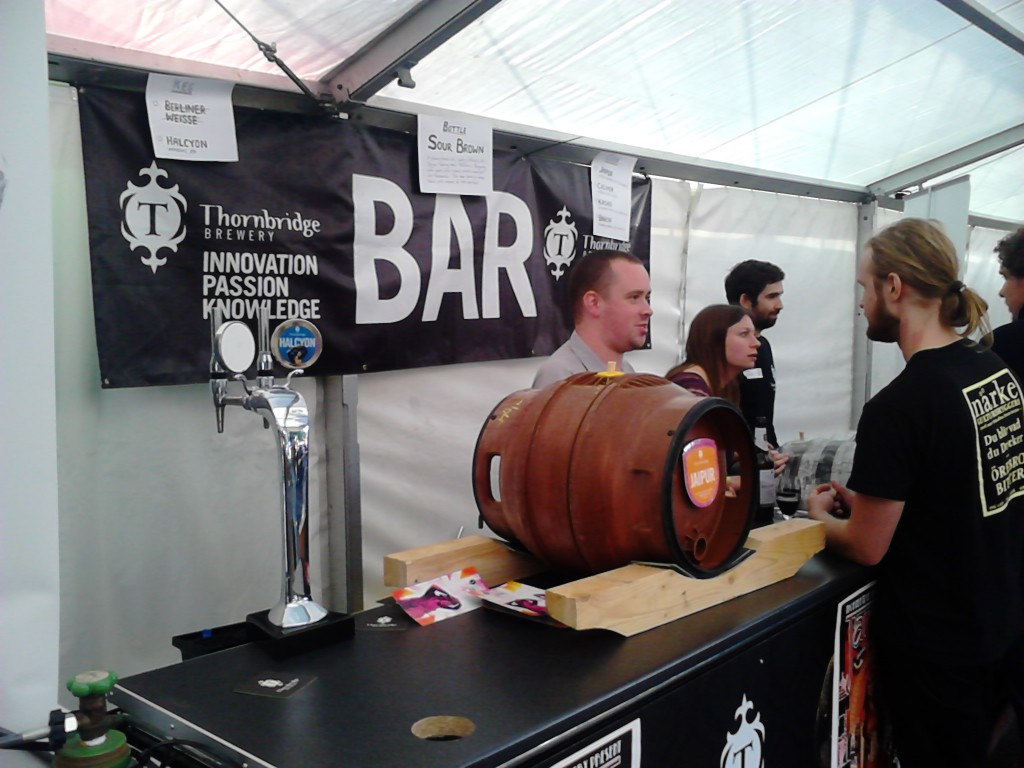 We work our way through the festival and taste everything that’s there, and then we still have a few hours to enjoy our favourites. I must admit that as much as I enjoy innovative beer, the very best beers are simpler. I like beer that tastes mostly of the malt and hops, and I found myself best at home in the long tent with English, Danish and Italian brewers. More simple pale ales, and less strange experiments to be found here. Some were old favourites that it was nice to have again, while others were new. With that in mind, I went back to The Kernel (Amarillo Simcoe IPA being the best of the bunch), Thornbridge and Amager in particular. I also went to Toccalmatto a few times for refills, but I wished they had brought the fantastic Grooving Hop…

Other than beautiful, easy drinking pale ales and pilsners, it’s of course strong and dark beers that can really make an impression, along with sour beers. The latter category often disappoints though, because the breweries present aren’t really sour beer experts – why aren’t there lambik or Flemish sour brewers at the festival?  Toccalmatto’s Vecchio Bruno stood out, as an elegant and well integrated sour beer, with lots of malty notes of caramel and dried fruits, balanced by brettanomyces notes and a light tartness. Among the dark beers, De Molen Hel & Verdoemenis impressed as usual, this time in an eisbocked version clocking in at 18% ABV, and a Kopi Luwak version with an elegant coffee flavour. There was also a Bowmore version, proving once again that peated smoke can ruin even the best beer.

A little surprise was the Spanish brewer Laugar, whose Aupa Tovarisch imperial stout in different barrel versions was really refined and elegant. Less surprising were Emelisse with their imperial stout aged on Buffalo Trace barrel, Amager Hr. Frederiksen on Niepoort Barrel (which didn’t add much to an already great beer) and To Øl By Udder Means on Moscatel barrel.

My favourite barley wine at the festival, not that there were much to choose from, was Toccalmatto Beddi Matri aged two years on marsala barrels. A rich and fruity barleywine with fine oxidation notes and vineous, warming alcohol. Best beer at the festival altogether: Thornbridge/S:t Eriks Imperial Raspberry Stout with lots of dark chocolate and even more raspberry character. A rather dry imperial stout, with a little added tartness from the berries. It ran out Friday night, and I absolutely didn’t have enough of it.

Friday night the mill was open for a couple of hours after the festival, but the queue was so long we gave up and went went back to our Tulip hotel where the hotel bar was already closed (10:30pm), so we went to bed and had a great nights sleep. Saturday night, the hotel bar was open until midnight and Mads and I had a couple of Duvels. Perhaps the hotel and De Molen could get in touch and make sure there are a few De Molen beers and longer hours Thursday to Saturday next year? After closing time, we went to the hotel room to share an amazing bottle of HORAL Geuze Mega Blend 2013  a mild and fruity, but very complex geuze, that in the end probably stood out as the best beer of the weekend.