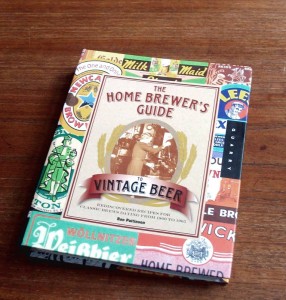 Ron Pattinson has studied historical beer for years, and he has now put together The Home Brewer’s Guide to Vintage Beer full of old recipes from British breweries, “translated” to modern home brewing. Divided into nine broad beer styles, the book takes us through numerous recipes used between 1800 and 1950. In most cases, they are based on the brewer’s actual brewing log from the brew day. You don’t find a much more authentic recipe on an early 19th century porter, an 1850s India Pale Ale, or mild ale or Burton Ale as they were served at the time of the First World War..

Before the recipes there are some general notes on traditional brewing techniques and the historically available ingredients. Both these things have been a challenge when adjusting the recipes for the modern home brewer, but the solutions are well explained. For example, we learn that historic brown malt wasn’t the same malt as the brown malt we can buy today, but it’s still considered the best option to use it. 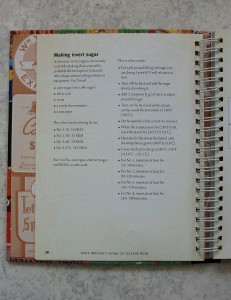 Brewing sugars, the so-called invert sugar is a part of many beers beginning from the second half of the 19th century. You can buy it today, but only in industrial scale amounts, and instead it’s explained how to make it at home. If you want to use the most authentic form of brewing sugar for British beer styles, you can see how to make it here on the right.

Each chapter begins with a short summary of the beer style’s historical development. The chapter on porter, for example, begins with five pages of history, followed by 16 recipes, each headed with little notes of interest. The first porter is a Barclay Perkins TT from 1804, where the notes say that because of restrictions on malt due to the war with France, this porter was only 5.3% ABV. For comparison, the second to last porter is a Barclay Perkins TT from 1936 – at that time it had reached 2.9% ABV!

For the historically interested beer lover there is a lot of amusement in such comparisons, and the interesting little notes. Did you know that imported American Cluster hops were used regularly as bittering hops all over Britain as early as in the 1860s, or that Fullers in 1910 used more adjuncts (invert sugar and maize) in their porter than most other brewers. Or that they brewed mild ales at above 10% ABV in the 1830s? Mild meant un-aged beer, and not mild in any other way. This mild ale had a bitterness of 73 IBU, while a stock ale, an aged ale, from the same decade and with the same strength had an bitterness of 112 IBU.

But the real value of this book is for the home brewer with a little experience, who can read  recipe and learn from it. As with a good cookbook, half the joy is browsing through the book and just reading the recipes. Time will tell how many of them I will actually brew. But when the time comes, the book is very practical with a spiral binding, making it easy to keep it open on the right page. A fine little details that would improve many cookbooks too.

Buy the book on Amazon

Buy the book as Kindle E-book

Test one of the recipes for yourself! Here is an 1848 Imperial Brown Stout from the classic London brewer Barclay Perkins. It’s the original Imperial Russian Stout as brewed for the imperial Russian court in St. Petersburg. Each recipe in the book is set up in this reader-friendly format. The mashing schedule at the very bottom is how it was brewed back then. Ron Pattinson recommends a single infusion mash at 71C instead.