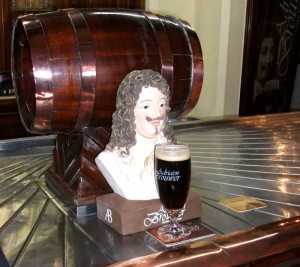 First we had a little taster of a caramelized onion soup with Ename Pater. It’s the newest beer in the Ename abbey beer range, modelled after the “Single”, the beer that the monks brew for their own consumption. It’s a 5.5% blonde with a nice hoppy character. The soup was a little too sweet for me, and at the same time the hop bitterness that the beer had added to the soup wasn’t very harmonious. It’s always dangerous cooking with hoppy beer. 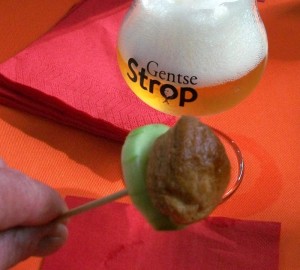 Second snack was a little puff cake on a stick, with Ename cheese and a slice of cucumber. It was matched with the fruity and yeasty 6.9% blonde called Gentse Strop. It’s a beer brewed for the citizens of Ghent, and the name has a long story behind it. The snack was a tasty little mouthful, and especially the cucumber played well with the fruity beer.

After sitting down in the tasting room, we had a really good (and obvious) beer pairing. A salad with pear and arugula as main ingredients, with a couple of baked prawns, and an Ename Tripel vinaigrette. Seafood and tripel always works, and the pear played very well with the sweeter fruity notes of the beer.

Next up was more seafood with the tripel. A baked dory, with the local Ganda ham, and a sabayonne of Gentse Strop. This worked again wonderfully with the tripel. Next, it was a little more heavy and intense. Pork cheeks in a dark Adriaen Brouwer sauce, with Pommes Pont Neuf. For the matching beer, we were given a quick course in Belgian draught beer. We each had to serve our own Adriaen Brouwer from tap.

The process is not what most of the world is used to, but it makes sense for the heavily carbonated Belgian beers. First, the glass is carefully cleansed, which of course makes sense anywhere in the world. Then a careful pour is started, with the glass held at an angle. The difference is that the glass is raised to vertical already halfway through the pour, to build a huge head of foam, and immediately after, the excess head is cut with a “beer knife”. The Belgians like a little too much head on their beer for my taste, but their beers invite to this kind of a pour.

We were entertained by a live action Adriaen Brouwer. The painter (1605-1638) was born in Oudenaarde, and painted a lot of common people in pubs and at celebrations, and it makes all kinds of sense that he should be honoured with a beer brewed in Oudenaarde. He told us of his story and his life, and about the beer brewed in his name. It is a light and “simple” beer, and I have to say that it was a little too light in body for the pork cheek and the heavy sauce. A dubbel would probably have been a better choice.

For dessert, we had a chocolate brownie, with nuts, caramel sauce and strawberries. The dessert beer was Adriaen Brouwer Dark Gold. A dark, 8.5% brown ale with a heavy sweetness. On it’s own, it’s too much, but served with a chocolate dessert, it makes better sense.

The food was prepared and served by Eat@12, a local, social job project in Oudenaarde. A very nice extra touch to an excellent lunch, and good to see the brewery work together with such a project.