Three Floyds have visited Amager Bryghus before. In 2013 they brewed the pale ale Arctic Sunstone. That pretty much took Danish hoppy beer to a new level on its own. Swole Mole isn’t that revolutionary, but it’s a great beer. Another version was brewed at Three Floyds in Indiana as Swole Patrol. 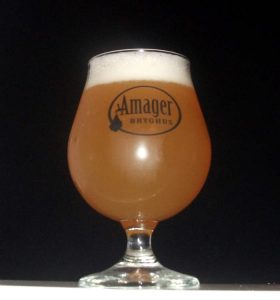 Swole Mole pours cloudy golden and holds a thick and long lasting white head. The aroma is a bit more malty than you would expect from these two breweries There are notes of bread crust, fresh grain and crackers, but you’re not in doubt that it’s from brewers who love their hops. Citrus dominates, but there are also more floral notes.

The flavour is mostly sweet, as you could probably expect from a 7% ABV lager. There is also a little alcohol showing. You just can’t hide alcohol in bottom fermented beers. It has fruity hops and a good bitter finish. On the surface, it could seem like a regular IPA, but a smart drinker can make out that it’s a lager. Between the malty character, the alcohol and a hint of sulphur in the nose, there are signs. 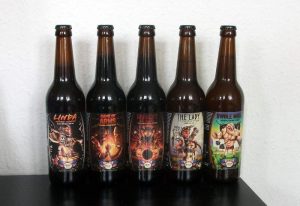 Swole Mole is a delicious beer, and you could easily just skip analyzing and just enjoy it as a good, hoppy beer. I know I will do just that next time I see it.